The Misfits Theatre Company inspires and supports people with learning disabilities through workshops spanning dance, drama and poetry. The workshops offer participants the opportunity to develop skills that improve their wellbeing, encouraging physical activity, creativity and teamwork. The company’s programme of regular events aims to help members stay connected to their social networks, boost their independence and assist them in leading fulfilling lives.

People with learning disabilities are often more likely to experience physical health problems than their non-disabled peers. With in-person events put on hold during the pandemic, Misfits was concerned that this was having a significant impact on the health of its members, while feedback received from families highlighted that the group participants were struggling to maintain a regular routine of activity and were missing their friends. 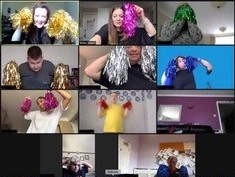 “Elliot loves to dance and join in with the movement class. It is normally his only opportunity to meet others with disabilities. His face lights up when he participates – Misfits is the highlight of his week. He enjoys the Zoom classes too whilst restrictions have been in place – I had to learn how to use Zoom so he could take part! Thanks for all you do to encourage Elliot to be active.”

In December 2020 Misfits asked SMV to help them adapt a weekly movement workshop so that the activities could continue online. The funding of £3,518 enabled the company’s facilitators to build a fun and engaging programme that would ease the sense of isolation imposed by the lockdowns.

The facilitators choreographed a range of themes – including gold-medal winning Olympic gymnastics, a Broadway chorus line and being a popstar – exploring different styles of dancing from contemporary to ballet and improvisation. They also made or purchased a selection of props, which were delivered to each participant at home.

A group of 14 members took part in the online workshops, collaborating with each other and the facilitators to improvise dances based around the themes. The Misfits team delivered sessions that enabled the group to learn music from one session to the next and come up with dance routines, using pom-poms, home-made microphones and chiffon scarves.

The facilitators were particularly impressed with the group’s ability to manage the change to the online workshops, which proved to be a valuable tool in keeping up their physical activity and enabling them to spend time together socially.

Despite the fun they had at the online workshops, the members of the movement group couldn’t wait to be back with their friends and creating dances together. In March 2022 the group returned to Hamilton House and has continued to grow, welcoming new members and successfully performing their dances, including at the Ardagh Cafe on Horfield Common during the summer. 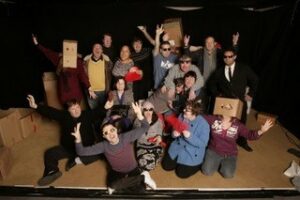 The company members enjoy being together at Hamilton House… 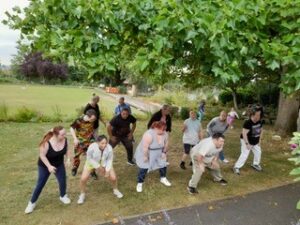