Inclusivity in action on the urgent matter of sustainability

Bristol is fast gaining a reputation as being a city that firmly has environmental sustainability on the agenda, endorsed by being recognised as the first UK European Green Capital in 2015 and a city that is committed to becoming carbon neutral by 2050 (with more recent ambitions to bring this forward to 2030). A wealth of innovative and collaborative initiatives and forums are all helping to drive sustainable projects and practices forward.

However, it was recognised that not all communities were involved and actively taking part in sustainability initiatives, or that their existing leadership and environmental practices were not recognised within the mainstream ‘green’ agenda. This was highlighted by Ujima Radio CIC (Ujima) who ran a series of “Green & Black” activities and debates and projects back in 2015 and 2016 exploring issues of exclusion and disadvantage with Black Asian Minority Ethnic community representatives. This highlighted perceptions of elitism, lack of institutional representation and weak understanding of community needs, with communities often feeling very disengaged on matters concerning environmental and sustainability. At the same time, an independent review of the EU Green Capital 2015 also found the need for more thought and resources to be devoted to “addressing the barriers that prevent members of excluded groups from attending meetings or engaging with civic lives in other ways”.

And so the Green & Black Ambassadors programme was born, with a pioneering six month pilot project co-delivered by Bristol Green Capital Partnership community interest company (BGCP) and Ujima and in partnership with the University of Bristol’s Cabot Institute.

Following the successful pilot, and with support from the National Lottery Community Fund, the programme re-launched in 2021. Over three years the programme will support 9 Black & Green Ambassadors who will work between Bristol’s diverse communities, businesses, other organisations and individuals across Bristol on issues of environmental sustainability, environmental equality, diversity and inclusion.

These outcomes will contribute to the central aim of reducing inequalities and enabling bold and inclusive action across the city towards a more sustainable Bristol, with an environmental community which is more representative of Bristol’s diverse communities.

In 2020, the Black & Green Ambassadors programme sought a grant from The Society of Merchant Venturers (SMV) to help kick-start the three-year project by contributing to the funding of year one direct costs and the recruitment and development of the first three Ambassadors – offering a unique leadership development opportunity to emerging leaders of African, Asian, Caribbean and Minority Ethnic heritage. SMV was pleased to award a grant of £5,000 to support this incredibly important initiative and in doing so help to enable previously disengaged communities to engage with matters concerning the environment and sustainability.

The Year One project is now coming to a close. Three Ambassadors were recruited (over 30 applied), with Asia Yousef, Olivia Sweeney and Roy Kareem chosen for their leadership potential and their proven interest in helping to address issues of exclusion and achieve environmental equality. A tailored programme of training and mentoring was put in place to support Ambassadors and to help them deliver a wide-ranging programme of radio shows, workshops and community based research, whilst enabling them to access professional development opportunities whilst being paid an above living wage salary.*

Project successes  to date include:

As lockdown eased in Spring 2021, Ambassadors launched community-based research projects to connect communities, challenge perceptions, explore issues of environmental inequality and amplify solutions with individuals from Bristol’s Black and Brown communities. Roy’s ‘Parklife’ interviews have gathered unheard stories about people’s experiences in the city’s green spaces which will be aired in a new series of podcasts. Olivia’s ‘to breathe’ project has looked into the issue of dirty air in Bristol through photography, radio shows, creative workshops and focus groups, helping to build community solutions and bridge the gap between those most affected and those who have the power or agency to effect change. Asia has worked with local groups to explore and exchange sustainable cultural practices, knowledge and experience which may not be traditionally thought of as “green”, engaging individuals of all ages through cooking and craft activities, and with her learnings due to be shared through videos, reports and exhibits.

The project is based on a “ripple effect” principle, investing intensively in a set of dedicated individuals as a route to a wider, more significant influence, lasting impact and wider societal change. Clearly, ripples have been made and will only increase as this programme gains momentum through its Ambassadors, with their reach, energy and passion for the important and vital matters of the environment, sustainability and inclusivity shining through. Over the three-year life of the project it’s estimated that at least nine Ambassadors (three each year) will engage with 200+ community participants, 30 Ujima volunteers and 150+ organisations and businesses. They will also reach a local listenership of 30K+ via radio and audiences of 2,000+ at events and workshops, as well as engaging with wider local and national audiences through other broadcast, social and print media, events and public engagement activities.

* “Getting out there and talking to people, which leads to so many more connections. Being more comfortable and articulate talking about and around difficult topics like race, and becoming a little more radical in my ideas!” Black & Green Ambassador – on their personal development.

** The audience was diverse in terms of numbers, reach and range of interests. As such it will firmly re-establish the Ambassadors within our community and beyond. In addressing the issues of the extent to which the leadership of the organisation resembles its population, Bristol and its greater region is achieving more than many locations! With the momentum that we already have, we have a great opportunity to become world-class exemplars in the wider environmental movement – a challenge we will relish” Peaches Golding OBE 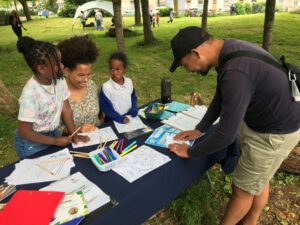